This story begins on a beach in Thailand. It was 2011, and Jesse Watkins was backpacking through Thailand with friends when he rolled his ankle while chasing a crab on a beach. 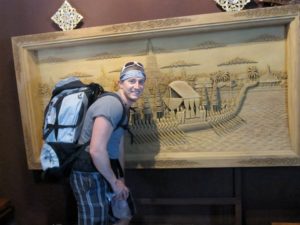 Thinking the pain would subside quickly, he did not seek any type of medical treatment. For the next three years, Jesse endured intense pain focused in his right ankle but referring up through his right knee and quadriceps. He says, “The pain was awful. I could only be standing for very minimal time each day.”

At the time, Jesse was living in Northern Virginia. He tried to ignore the pain and continue his regular routine, including working at a restaurant, lifting weights and golfing. He attempted to manage his pain with chiropractic adjustments, massages, and pain medications, but the pain did not subside.

Finally, in 2014, Jesse visited an orthopedic surgeon who took an MRI on his ankle. The MRI concluded he needed to have surgery to repair the torn ligaments and tendons in his right ankle. Following the ankle surgery, he began physical therapy treatment for around 8 weeks. Jesse recalls this first experience with physical therapy was not especially positive. He says, “I felt like the PT treatment was very passive. The treatment plan wasn’t clearly laid out for me.”

He self-discharged from PT early but continued his ankle exercises as instructed. He says, “It took me about 6 months of very light working out to heal, versus the 6-8 weeks that was planned, just to get myself back to where I felt good.” At that point, he resumed all activities including golf and his work out routine, lifting weights 3 to 5 days a week. The pain returned.

Jesse says, “Someone who is active like me, when you are told by a doctor that you need to rest, but you feel good in your body, you’re going to get right back to doing whatever it is you were doing… and that’s the problem. “ 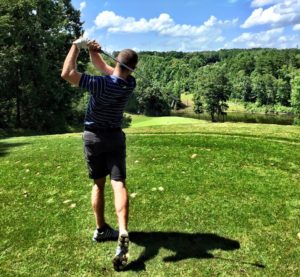 In early 2015, Jesse moved home to Halifax County, Virginia to help run his family business, the Nola Watkins Collection. He dove into working with the business, still managing his chronic pain with chiropractic care, massage, and medication. Then Jesse was introduced to Hot Asana Yoga Studio in nearby Danville and started practicing yoga regularly. He says, “My body felt ten times better than it ever did before, but staying so active still caused flare ups and inflammation.” 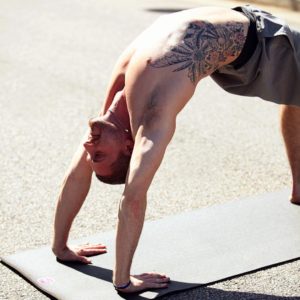 Jesse became a certified yoga teacher in 2016. He says, “Becoming a yoga teacher gave me the opportunity to learn how everything in the body is connected. I began to notice a lot of my pain was due to never giving my body proper rest for it to be able to heal fully.”

He continued teaching and practicing yoga, complemented by regular chiropractic care and massage for immediate pain relief, but he began to grow fatigued by the cycle of chronic pain. He says, “As a yoga teacher, my job is to help people feel good in their bodies. It is extremely frustrating when I don’t feel good in mine.”

In early 2017, a flare up of pain in his right shoulder led Jesse to visit an orthopedic surgeon again. This physician recommended trigger point dry needling by a physical therapist. After one dry needling session, Jesse’s shoulder felt better, but he could not continue treatment because it was time to travel back to Thailand, where this story began. Following 8 weeks of intensive yoga teacher training and traveling, he returned to his full teaching schedule at Hot Asana in Danville and at the YMCA in South Boston, Virginia. It was not long before he began to experience severe pain in his right lower back.

When this flare up of low back pain caused Jesse to cancel a golf outing, a friend suggested he give physical therapy another try. This led Jesse to schedule an appointment with Dr. Will Nutt, PT at ACI Physical Therapy in Roxboro, NC.

After evaluating Jesse’s past injury and history of pain, Dr. Nutt began treating Jesse’s “cranky right side” with trigger point dry needling, manual therapy and therapeutic exercises specific to Jesse’s problem sites. The goal of Jesse’s physical therapy treatment plan is to reduce or eliminate his chronic pain, at long last. Jesse says, “I really appreciate how well Will explains what is going on in my body, how pain in one area leads to pain in another and what each treatment is designed to do.” 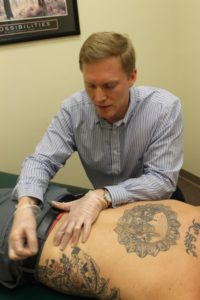 After just one physical therapy treatment, Jesse says he felt 100% better, but still ignored Dr. Nutt’s instruction to take it easy. Within a few days full of physical activity, Jesse’s pain returned, this time traveling from his right calf up to his low back.

After the second treatment, Jesse again experienced immediate relief for his low back and leg pain. This time, he took time to rest his body, and enjoyed being nearly pain-free for almost a week – which is a huge milestone in the context of this story!

With several physical therapy treatment sessions remaining in his plan of care, we look forward to helping Jesse effectively reduce his pain for the long-term so that he can fully enjoy his active lifestyle. Stay tuned – we will keep you updated! 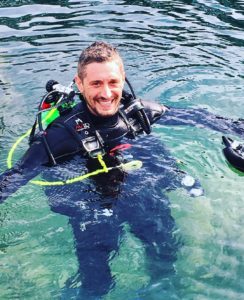 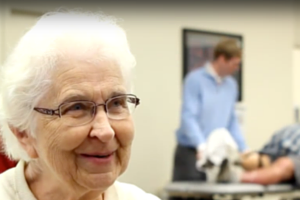 Grace suffered from low back pain, which resulted in leg weakness and difficulty walking. Her low back pain was seriously limiting her ability to function and enjoy life. Going shopping was painful. Moving around the house was painful. Lying down was painful.

Grace says she quickly felt the results of her Physical Therapy treatments. She progressed to using a four-legged cane, then a regular cane. At discharge, Grace was table to walk pain-free without any assistive device.

With help from ACI Physical Therapy, Grace reduced her low back pain, increased strength and mobility, and got back to enjoying life!

Rachel is a “doer.” Rachel is employed in a school cafeteria and she is very involved in her church. She enjoys getting things done around her house and in her community.

But starting last fall, Rachel’s ability to “do” has been limited. Rachel first injured her shoulder in the fall of 2015 while at work in the school cafeteria lifting boxes and crates. She underwent surgery in February of 2016 to repair a rotator cuff tear. After surgery, she began outpatient physical therapy at ACI Physical Therapy in Yanceyville.  Rachel chose Accelerated Care because her sister was a previous patient and had recommended Dr. Ryan Rubio, PT.

Like her sister, Rachel enjoyed the professional, upbeat, friendly atmosphere at ACI Physical Therapy. She said, “They’re treating the person as well as the injury. They treat you as an individual, they talk to you while you’re going through your therapy… and it makes you feel more comfortable.”

When she first arrived at ACI Physical Therapy, Rachel’s arm was in a sling and she was experiencing substantial pain. After a thorough examination, her Physical Therapist created a personalized Physical Therapy Plan of Care including skilled Physical Therapy procedures and a Home Exercise Program. Her goals were to become independent with at-home exercises and to reduce pain and improve range of motion in her shoulder in order to restore her prior level of function.

Rachel’s treatment began with hands-on manual therapy to gently get the shoulder moving again. She progressed to therapeutic exercise supervised by her therapist, and was instructed in a Home Exercise Program to help her progress between visits.

Rachel experienced real, measurable improvement throughout her course of treatment at Accelerated Care Physical Therapy. After several visits, Rachel was improving and her physician was pleased with her progress. Rachel was able to discontinue use of a sling. Rachel began doing her Home Exercise Program designed by Dr. Rubio, and eventually progressed to lifting, pushing, and pulling more weight during her therapy visits. As her movement and function improved, Rachel’s pain also improved drastically.

Rachel credits ACI Physical Therapy with restoring her function. She said, “It was tough, they worked me hard, but I got back 100%.”

Special thanks to Rachel for sharing her physical therapy success story and for choosing ACI Physical Therapy!